Thanks to everyone that played Buoyancy at PAX and SIX!

Our booth was swamped by the time the doors opened until the Expo Hall was closed. We were also at the Seattle Indies Expo on Sunday with another overwhelmingly positive response from players. The plan is to have Buoyancy released well before next years PAX West.

Don't like where you placed some of your buildings? Just destroy the connection and reattach them wherever you'd like! Now @EcnaEcna can relive his childhood river rafting shenanigans. This feature is still being prototyped. #madewithunity #unity3d #indiedev #gamedev #citybuilder pic.twitter.com/k8Nbf8Zw42

“Floaters” are buildings that have been disconnected from the main Town Center foundation. This can happen from player destruction, storms, or fires. Originally the floater would still technically be attached to the city and follow you when you moved. Villagers on a floater section would still usually function if possible; like mini city ecosystems.

Now floaters will completely be detached from the city. If you move your city away from a floater section then it will stay in that portion of the ocean, but now you have 2 new options to reattached your floaters back to your city. The first is the original way, but with a twist. Originally you could just build new structures that connect the floaters to the main section. Now you have the option of moving your city and rotating it around your floaters to rearrange your city’s configurations. You can also just ram part of your city into your floaters and it will reconnect/snap to the collision point.

City Analytics is a new feature I’ve been working on. This tracks the production of resources over the course of the days you have survived. This will be graphed on the UI for visual representations. This will initially be used by the devs for balancing, but hopefully in the future it will be polished and be apart of the players tool-set for managing their cities. Aside from resource production we also plan to graph: Happiness, Nourishment, reproduction, and possibly more. 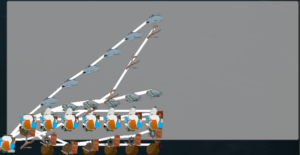 The upgrade system that we originally had was a step in the right direction for a greater player experience but it didn’t seem to work well gameplay-wise. It didn’t feel rewarding and there was too much randomness involved which left players feeling hopeless when they wanted to improve a specific building but was never able to find the upgrade needed. So it was back to the drawing board.

That’s when the tech tree concepting began. We have gone through many iterations – which I’ll show here – but we believe we have narrowed down the design. To use the tech tree you must have acquired “tech points”. These can be found from relics of the old world, purchased from certain traders at a high cost, or stolen from other cities. There is also a plan for a building to be added that provides a slow but steady income of points.

With the new renown system and interactions with the various cities and factions, we decided to dive deeper into what each faction believes, how they act, and who their leaders and key figures are. At certain points in the game players will be able to ally themselves with one of the three major factions – or remain completely independent – with each play through.

In addition there will be independent cities that belong to no factions.

We have also been working on writing the world origins. This will be discovered by players through gameplay mechanics such as exploring and piecing together relics of previous civilizations, scientific research, etc.

I made a notification and choices system. When in range of something applicable a notification will pop up. Clicking on it will give choices; these choices are stuff like Trade, Take Prisoners, Demand Resources, and uhh cannibalism. Some of these choices are evil but your city might need food, stuff, or you just wanna be a badass pirate city. In the end we want your decisions to impact what happens later in the game.

Renown is our first step in making a reputation type of system that will interact with Factions and other cities. Unforgiving acts like cannibalism and imprisoning survivors will reduce your renown, while making trades will net you some renown. I’ve been working on some formulas and diminishing returns for this stuff.

Low renown (being evil) will have benefits as well as being high renown will have its own benefits.

The movement controls have been reworked based on the convention feedback. Resource nodes and other world things to click on can now be accessed during movement.  Left click had to be abandoned for that feature, and so Right click is now the default movement destination setter. We disabled the right click quick build menu for this change. Entering movement mode is now Spacebar. For experimental purposes building placement has been enabled while moving. I also added some line renderer thingies to show your cities path.

In summary, movement mode is a lot quicker to access and you can do more while in it, compared to just watching your city move.

an attempt to guide the player during city movement from BuoyancyGame

The anchor has been disabled after much detest 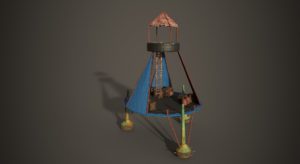 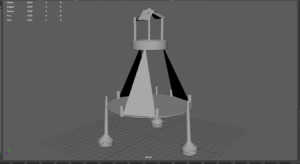 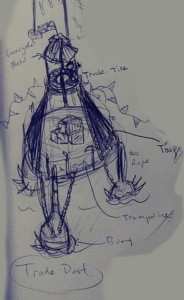 The trade post asset is done and is in the game. It is a world node that you can find exploring the vast waters. Finding them will allow you to trade and destroy for resources. (Thanks zom for the concept to work on.) 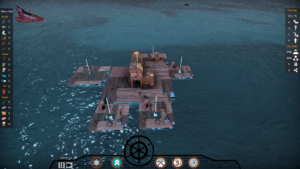 Another project for me is experimenting currently with UI design. Our current one has a lot to be desired and its about time that we find a comfortable and visual engaging UI for players.