Hello everyone. This devlog we have a lot of cool additions and changes to the game. Since the last devlog some of the team went to Dreamhack in Atlanta to present Buoyancy as the Best Indie Early Access game. We are also announcing our release plans and a tentative feature list to get to our release Alpha.

Zomawia and Kobey got back from Dreamhack Atlanta 2018. It was our first convention out of the PNW and it was a blast! Although Dreamhack was not entirely indie-game focused we had a lot of interested gamers, content creators, and streamers check out Buoyancy.

Kobey even got a interview with Subnation.

We met a lot of cool indie devs and also some familiar faces. Check em out:

Collidalot
A local multiplayer game where players pilot post-apocalyptic hover cars and crash them into each other in destruction derby fashion.

Torn Asunder
Tear off their limbs, use them as weapons, conquer the environment, destroy the primevals, SURVIVE THE ONSLAUGHT.

Griefhelm
Nidhogg inspired dueling game with a combat system similar to Mount & Blade‘s, which allows you to attack and parry from three different directions.

Verlet Swing
Energetic swinging in a world that would be best described as a fever dream.

Thanks to everyone who came by the booth at Dreamhack and played Buoyancy.

Initially we were trying to get Buoyancy out by the end of this year. Due to some personal life things, our part-time development cycle, and a bit of ambitious features we thought it was best to move the release next year. So we plan on releasing Buoyancy on Steam Early Access in Spring 2019.

For our release we want these key features and assets to reach Alpha:

In the meantime we are working on getting our Steam page setup which should be out by the next Devlog!

I had worked on changing the way the rig is controlled due to the fact that the previous setup was a bit tedious with the limited amount of bones on the villagers; because of that it gives the perfect chance to recreate the animations, so no more villagers and pirates throwing there feet out and marching to the nearest brewery!

Some of Kevin’s new villager animations from BuoyancyGame

Resource production in Buoyancy has traditionally always been in units of 1. Buildings could only make 1 unit of a resource at a time. Construction and Input tasks also only allowed 1 unit to be transported at a time. This made it very difficult to balance resource production while also balancing the amount of tasks needed to keep the flow of resources going. Making buildings produce faster to boost production also cause more tasks being needed to support the production of the resource.

We have reworked all of the buildings to now produce multiple units of a resource at a time. Villagers now have a carrying capacity for Construction and Input tasks. This way we have more control of the production rate of resources as well as managing how many tasks are needed to support a single function.

Population Control has been removed from Buoyancy. It was originally implemented to help new players adjust to the game at a slower pace, allowing the player to choose when to progress to a higher population to manage. We realized this took a lot of the challenge out of Buoyancy and so we have removed population caps entirely. Your city will now continue to repopulate until there are no more people to repopulate with. Your job is to keep up with their expansion and keep everyone alive and happy, good luck.

The new Trade Ships now spawn in the world looking for cities to exchange goods throughout the sunken world. When a trade ship engages near your city you will be prompt to respond with actions.

Thanks to Keenan for creating the majority of the mesh while I worked on the textures.

The goals for making the trade ship were: 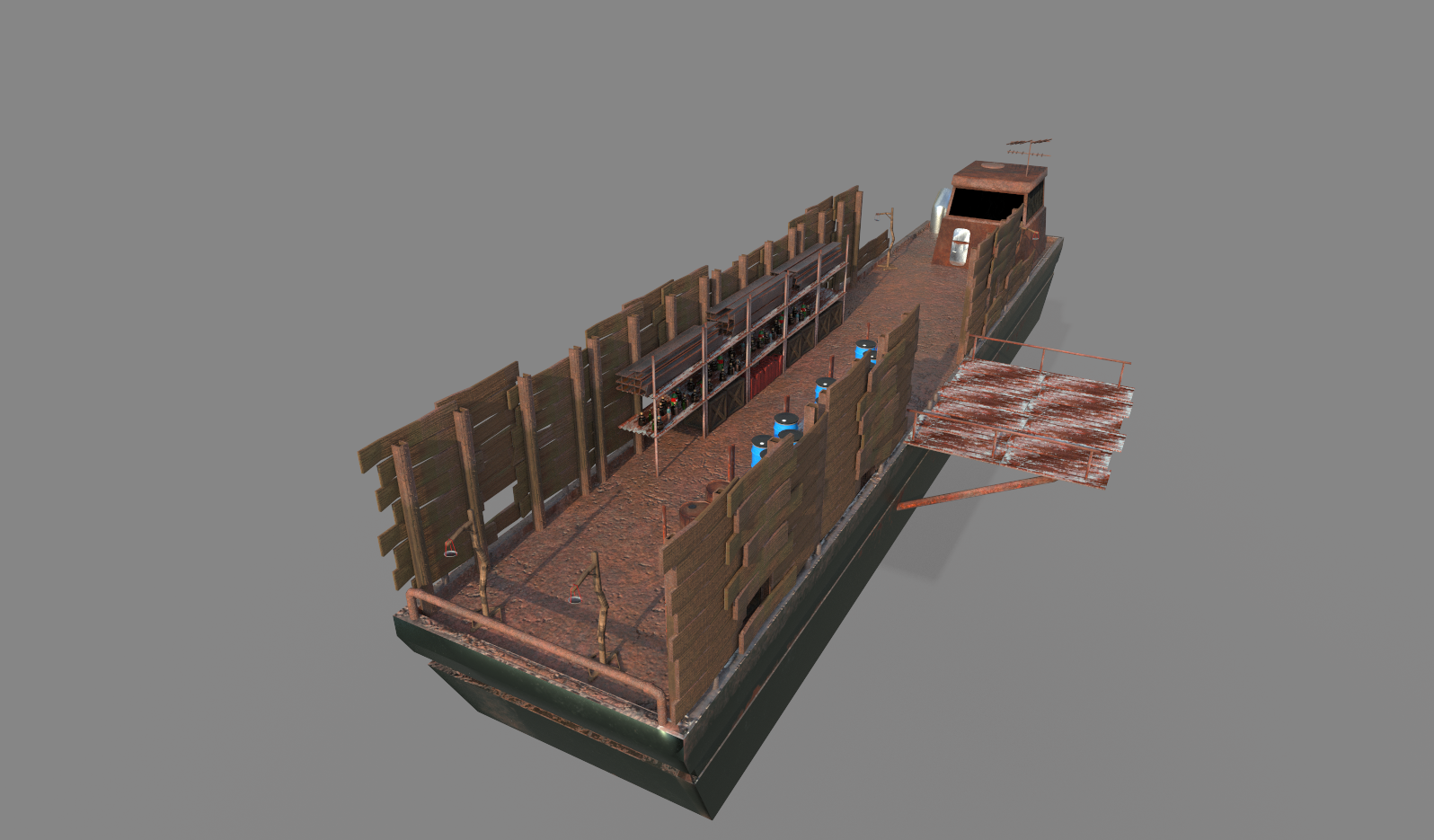 After many iterations and feeling just how the tech tree should work and feel, we have finally pinned down how the layout will be. Most technology upgrades have found a home somewhere in the tree and many of those have been implemented and tested in development builds. A log regarding the tech tree in greater detail will be posted when the tree has been implemented and ready to be used.

The first pass of particle updating is complete. We have added new effects to help bring the world to life as well as help signal events to the player. This pass also included improvements to the whale effects.

There are three types of pirates, one of which is a fire loving anarchist. These pirates will throw Molotov cocktail at a building to light it on fire. This is the current effect.

Colliding your city into a large object like a sunken ships wasn’t very noticeable and often confused players when their city suddenly stopped moving. I added a camera shake and visual effect to better emphasis the collision.

An issue we had with the whale particle effects (spurt of water and tail splash) was when the whale moved so did the effect. As simple as simulating the effect in the world would have been, that wasn’t possible with the way that the world interacts with the city. A fix has been made and now the effect simulates better. More tweaks to the effects will be made in another pass through.

Since the last Devlog I’ve been getting more framework in for AI behaviors for City Wars. We are trying to deviate from the standard RTS-style of troop selection boxes and move here commands, and instead simplify commanding your troops. For this we have “Attack Moves” (AM), one each for melee and range, that you can place on any foundation. The system will automatically select which units to send and they will do a traditional RTS “attack move” to the destination. The player will be able to increase and decrease new attack move sizes, and the system will grab units from other AMs if any are available.

The AI still has a bit ways to go to complete this feature. I also want other cities to have their own strategies depending on their buildings (eg. towers, lots of ranged units, etc.), and also the city layout (weak side, attack side). The player is expected to adapt to these strategies with attacking or defending. Think of it like two warships duking it out with their towers/cannons, and when the time is right someone should dock and push forward.

When a city war is won the player can expect a tremendous amount of resources and tech points to offset the costly nature of fighting.

After testing the new Movement mode and Rowing mechanic at PRGE, it seemed like controlling any rowing tasks was too complicated and confusing.

I made the UI more simple and also made the rowing mechanic more seamless. The system will only assign the optimal amount before max speed is reached. I’ve learned that the majority of players want to get to their destination as quick as possible. If there’s not enough laborers to row max speed, I put in an Emergency Rowing button to make Guards and Specialists row the damn city.

There’s a bit more work to do and some bugs to fix, but it works well and gives the player the feedback they need.

Guards now have a training time before they can effectively use their armor/weapon. They automatically train when they are idling at a Guardhouse and they will become stronger and deal more damage as the days pass. In addition the Guardhouse can now be paused so that the Guards turn back into normal Villagers and resume normal city tasks. The re-tasked Guards will still keep their combat prowess if enlisted again.

During a Pirate attack you will still immediately have a new Guard replaced if an existing one dies, but they won’t be as strong.

I arranged some existing assets to make some new resource node assets providing more environment variation. Additionally they will be able to spawn with other resource nodes, most likely Schools of Fish.

The Destroyed Ship gives a Scrap Metal bonus to Scavengers.